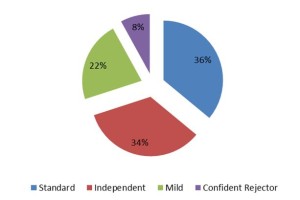 This is the largest category and is defined as active believers in a traditional global religion.  They are confident in their beliefs and active in their consideration or practice of faith.  This category divides into two groups that are very close and each group is itself very homogenous with a low level of diversity.  The two groups largely divide along the lines of whether people approach god with their head or their heart.  The Heart Believers tend to approach god emotionally while The Book Believers are more structured in their approach and harness their rationality with the scriptures and doctrines of their religion.

The size of this category was a surprise for me.  People in this category are all active in the pursuit and questioning of faith, but have rejected organized religion and have struck out on their own.   The category divides into three groups and as one would expect, these are the most heterogeneous groups as they are the people who actively question and consider the issue but don’t have the structure of an institutionalized doctrine to unify them.  The three groups are; Independent Thinkers who are like philosophers in their approach, more intellectual and often struggling to reconcile their rationality with their spiritual emotions.  Independent Spirits who have largely renounced the idea of a personal god but still believe in the divine and have no problem managing uncertainty and Independent Believers, who have come from an organized religion but have dropped most of the details and doctrine of that religion while keeping a close relationship with a personal god.

They are the hardest to define as they are the least confident in their beliefs, and are mostly defined by their passivity.  They are divided into two groups that are closely connected.  The Mild Rejectors are made up of vaguely non-believers, who generally ignore the question and if asked might well say they are atheist or agnostic.  The Mild Acceptors tick the cultural box of a religion but do little about it, having no active relationship with a god, but if asked in a survey would probably still say they belong to whatever religion they were brought up with.

These people are confident in their belief that there is no god or divine at all.  When we are dead we are dead and that’s it.  They are a homogenous group, certain in their beliefs and share a confident reliance on their rationality to the question that tends to lead them to a common doctrine.

Posted in Groups and Themes